The How The Turntables meme originates from the American mockumentary sitcom television series The Office that aired on April 23, 2009. In episode 25 season 5, Michael Scott (the character played by Steve Carell) says this to David Wallace (the character played by Andy Buckley). The original saying is “How the tables have turned”, to be used in a situation when the person who once had the advantage in a situation now has the disadvantage and vice versa. This expression is often used to reflect on major changes between two parties or to imagine what would happen in a hypothetical situation where the roles were reversed.

Coming back to the show, the actual reason it’s funny is that Michael’s paper company went from being laughed at by the top executives to success. The executives have to come to terms with the fact they got showed up by a guy who doesn’t even understand simple sayings like “my how the tables have turned.” Also in the scene, the last syllable is supposed to be followed up by more words. The awkward grammar of the wrong saying said in a very confident manner followed by excruciating silence and the acceptance nod made it a sensational scene for the fans. Later, this became a meme, and that meme has been passed around ever since. 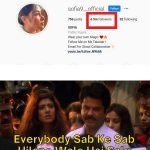 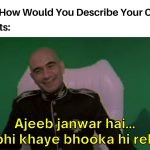