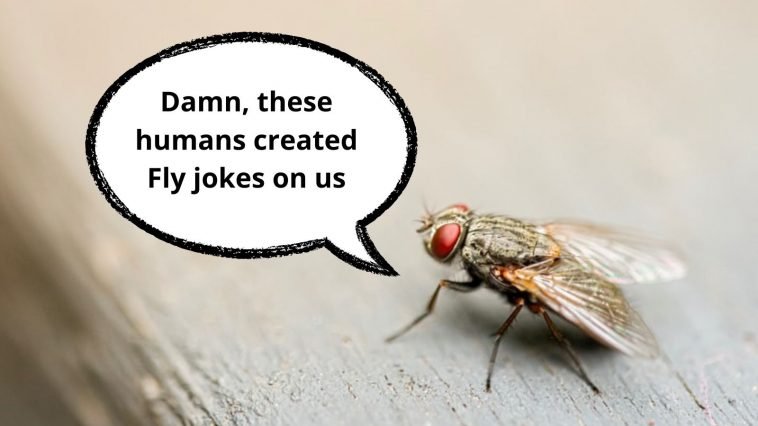 Flies are one of the most common pests around the world with more than 120k of their kind living on the planet earth. Despite their short lifespans, flies have the ability to reproduce in great numbers and are capable of transmitting diseases such as malaria, salmonella, and tuberculosis. But these pests are not forgiven from the wraths of humor, known as Fly Jokes.

To put these in simpler terms, you can use these Fly jokes to bring a smile to the face of your friend or family if they have come across one of the pests in their everyday life.

Customer: Waiter, What is this fly doing in my soup?

A fly is a species that gets in through the smallest hole in the room but can’t get out through an open window!

What did the bug say to its friends when it looked at its watch?

How many flies does it take to screw in a light bulb?

Two, but I don’t know how they got in there.

How does the fly keep a track of its money?

What do you call a housefly and spider pals?

What do you call an insect that can lay bricks?

What did the frog order at McDonald’s?

French flies and a diet groak!

What do you call a fly riding in the Grand National?

I wanted to stop him but he was on a roll!

What kind of fly sounds croaky when it speaks?

What do you call a fly that has died?

Why was the fly looking for the rubbish bin?

It was a litter bug!

The life expectancy of housefly is generally 15 to 30 days.

It spends most of it trolling you!

What did the fly’s mum say to its grumpy child?

Which insect has the safest flight?

How did the police get rid of the flies?

They called in the SWAT team!

What did the firefly say to the other firefly?

What advice does a Mother fly give her son for the circus?

My child, be careful when they applaud!

Why do birds fly upside down over Alabama?

There is nothing there worth shitting on.

How do you if a fly is an actor?

They’re always on the screen!

What did the fly reply to the man when enquired about sitting on his popcorn during movie night?

I liked the book, bro!

What’s the most slippery insect?

What did the other fly say to his friend after it farts sitting on a poop?

Do you mind? I’m eating my lunch!

Why did the firefly keep taking things?

Don’t you think our son is too bright for his peers?!”

Which fly smells the most?

What did one firefly say to its friends?

Sorry I’ve got to glow now!

What does the house fly say when a robber fly enters their locality?

What has two wheels and flies?

What did the rat order for lunch?

How do you keep flies out of the kitchen?

Put a pile of poo in the garden!

What is the difference between a fly and a bird?

A bird can fly but a fly can’t bird!

Why were the flies playing football in the saucer?

They were playing for the cup!

What do you call a fly with no wings?

So there’s a fly and a gnat lands on its back.

The fly says, “that’s the worst pun I’ve ever heard.”

The gnat goes, “what do you expect, I just made it up on the fly!”

These jokes don’t fly with them.

What happened to the fly that was sitting on the toilet seat?

He got pissed off.

What did the spider say to the fly?

This fly is flying about a barn until he comes across a massive pile of cow poo. “Yum!” exclaims the fly, who buzzes down to it and gorges himself until his wings can no longer carry him.

“That’s fine,” the fly thinks, “if I get some air first, I’ll be able to fly no issue.” So he finds a pitchfork resting against the barn wall and climbs all the way to the top at the handle. He launches himself off the pitchfork with a heave, flaps his wings as hard as he can, but lacks power and splats over the ground dead.

Moral: Never fly off the handle when you’re full of shit.

Is this stool taken?

Why did the blind fly die of starvation?

Because he couldn’t see shit.

Why did the fly fall off the wall?

Because someone tied a piano to its leg.

What has six wheels and flies?

A police officer pulls over a farmer for speeding and issues him a penalty.

The farmer spots several flies hovering around, which irritates the officer. The officer is shooing flies rather than writing.

“I see you’re bothered by those circle flies,” the farmer observes.

“If that’s what you call them, yes, they are quite annoying,” the cop responds.

“Yeah, we call them that because we see them circling around the rear ends of horses,” the farmer explains.

The officer says, “Hmmm. Did you just refer to me as a horse’s ass?”

The farmer says, “No, sir, officer. I have much too much respect for law enforcement officers to ever utter such a thing.”

He further adds,” But… it’s difficult to fool those circle flies.”

You catch more flies with honey…

But you catch more honeys by being fly.

What do you call a fly that loses its wings and four legs?

A woman enters a store on a hot summer morning, takes up a can of fly spray, and inquires, ‘Is this any good for flies?’

“Not really,” says the assistant. “It kills them.”

What could be worse than discovering a fly in your soup?

Getting hit by a bus.

When a woman entered the kitchen, she discovered her husband lurking about with a fly swatter.

“What are you up to?” she inquired.

“Oh, you’re killing any?” she inquired.

“How can you tell them apart?” she inquired, intrigued.

Honestly, he should have chosen a different exterminator.

How do you get a pound of meat out of a fly?

There was a fly in my home.

So I called the SWAT team.

A wolf hound is being buzzed by a fly.

Fly: What breed of dog are you?

Dog: My breed is a wolf hound.

Fly: What? A wolfhound? Unusual name. Why are they calling you that?

Dog: Well, it’s pretty clear, I suppose. My father was a wolf, and my mother was a hound.

Dog: So, what type of fly are you?

Fly: My name is a horse-fly.

What did the procrastinating spider say to the fly?

Two flies walk into a bar.

The first fly says, “Waiter, I’ll have the poop with onions.”

The second fly says, “I’ll also have the poop but with no onions. Onions make my breath smell bad.”

How do flies and mosquitoes differ from one another?

A mosquito can fly, but fly can’t mosquito.

Ben was walking down the street when he noticed a lady shouting at him.

“Wait a minute, your fly is down!” She yelled.

Ben returned his attention to his pet fly. “What’s the deal, dude? You can always reach out to me.”

Fly says, “Oh, it’s been a difficult week. My wife abandoned me. I lost my job, and having your junk out doesn’t make this talk any easier.”

That will be all in our list of the best jokes. Do let us know your fly jokes and puns in the comment section below! 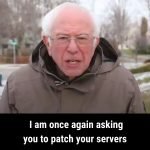 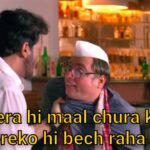