The Are You Comedy Me meme originates from the Satirical comedy program What the Flop hosted by Nepali stand-up comedian Sandip Chettri. The show video dated 15 November 2015 shows an act of Mithai Lal Yadav (the character played by Sandip Chettri) who had been interviewed by a reporter for declaring a ‘band’ in Nepal especially Terai region for his ‘personal demands.’  In the meme which went viral involves a sequence when the interviewer asks, “What did you get through this movement?” To this, the interviewee replied, “Are you comedy me?” The popular usage of the meme is when you have to play down a situation in a humorous fashion. 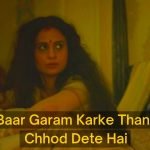