The Haan Ye Karlo Pehle meme originates from the 2005 Indian reality stand-up comedy series The Great Indian Laughter Challenge. Raju Shrivastav, who was the second runner up in the show used Gajodhar Bhaiya as a common Indian man to showcase his comedies. The screenshot which went viral especially during the lockdown period involves Gajodhar Bhaiya saying, “Han Ye Karlo Pehle.” 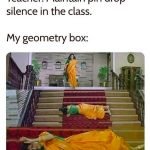