The Taste kaha hai meme originates from the Everest Spices’s commercial which was aired on television between 2003 and 2005. The advertisement clip was one of the aggressive campaigns launched by the company which helped it gain a 30% share of the branded pure spices market in India by mid-2000s. The English translation of Taste kahan hai is “Where is Taste?” The video of the commercial was uploaded on Youtube on August 8, 2009, by a channel Sadiq Gaziyani. The 3 boxed panes in the meme represent school children, pandits, and the working class of the Indian population. The exact source of the memes is still unknown but there have been many discussions on the ad videos which tracks back the meme emergence in the year 2017. The popular use of the Taste kaha hai meme is to mock something that inadequate or unavailable. 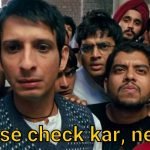