The world is a cruel and unjust place meme originates from the popular Internet meme Feels Guy or Wojak used to portray emotions like sadness, regret, or loneliness in a generic way. On 22nd August 2020, a Facebook page called Aborted Dreams posted a meme that involved two panes: upper and lower. The upper pane depicted a sad Wojak saying, “The world is a cruel and unjust place. There is no harmony in the universe. The only constant is suffering.” Meanwhile, the next pane depicts Wojak with a reddish shade on face (blushing) saying, “OMG, a Dog.” The meme became repeatedly used on different social media platforms. Later in 2021, there have been a number of instances of the meme being used on subreddit like /r/Portal and /r/Memes. The popular use of the world is a cruel and unjust place meme is to mock fun at someone who shows erratic mood swings. 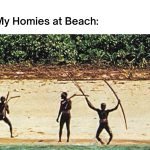