The internet is alive and well. It adapts, evolves, and reacts to real-time occurrences. With technology evolving at a breakneck pace, it’s easy to miss the current golden era of the latest online fad. Memes have now been around for over 20 years and abbreviations (like the ubiquitous “Le”) are very commonly used in memes. So, if you had a really lengthy blink during the last decade, give or take, you may have missed the celestial wonders known as memes and their acronyms. Today, we are going to take a look at the le meaning in memes.

Because le is widely perceived as being stereotypical of the language, English people frequently use it to Francize expressions or mock sophistication in general. It is used to emphasise objects in memes, more specifically in rage comics, “le me”, “le bed”, and so on, all in an effort to emphasise the object’s implication in the context of the rage comic, because rage comics are frequently poorly drawn, and the reader needs to be explicitly told what each object in the drawing is.

You must be having a good understanding of reflexive pronouns. For example, in the first person singular, the terms I, Me, Myself, and Mine are employed. However, we must understand when and where to employ these words in accordance with grammar standards.

If ‘you’ are the subject of a sentence, we must definitely use the first case. For example: ‘I’ bought a pencil.

You must use ‘me’ in the second case if you are the object of a sentence: For example: He bought ‘me’ a pencil.

Origin of Le in Memes

The origin of Le in memes can be dated back to October 30th, 2003 when Jason Windsor of Albino Blacksheep released The End of the World (also known as End of Ze World), a Flash animation viral film. It is being assumed that the use of Le in memes started in 2009 on Reddit and 9gag. The spread increased throughout the 2010s and reached different social media platforms. Even though you are the subject of the template’s content, it wouldn’t sound right to use ‘I’ in the first place in a meme. As a result, instead of typing ‘I,’ internet users began to use ‘Le,’ which sounds similar to ‘The.’ This is why the Internet community frequently uses the phrase “Le me.”

#Le me in the public park#

Outer Me: You should ask before petting the stranger’s dog.

Inner me: Grab it and run. 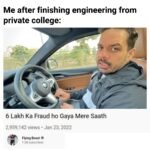 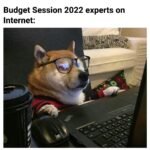