The In Search of Gold We Lost Diamond meme originates from Indian Instagram pages while the exact source of the meme trend is still not known due to the different templates used in the making.

In the meme, there are two different panes. The pane on the left represents ‘In Search of Gold’ meaning our exploration of something new which later turned out to be fine but not equal to the object or person in the right pane. The pane on the right represents ‘We Lost Diamond’ meaning the one which still remains unmatched turned out that it was lost in the midst of exploring.

The popular use of the In Search of Gold We Lost Diamond meme is to compare two persons or objects among which one turned out to be disappointing.

Popular In Search Of Gold Memes 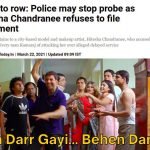