The Kaanp Kahe Rahi Ho meme originates from the 2012 Indian film Gangs of Wasseypur. In this Bollywood movie, Sardar Khan (the character played by Manoj Bajpayee) says this dialogue to Durga (the character played by Reema Sen) when he is flirting with the cook while hiding in Wasseypur at the home of Qamar Makhdoom. The popular use of Kaanp Kahe Rahi Ho meme is to mock someone who is trembling with fear. 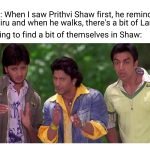 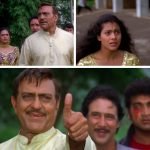