The Mujhe Ghar Jana Hai meme originates from the 2018 Indian film Raazi. In this Bollywood movie, Sehmat (the character played by Alia Bhatt) says this dialogue to Khalid Mir (the character played by Jaideep Ahlawat) when she confronts him for a failed attack on her which killed her husband. The popular use of Mujhe Ghar Jana Hai meme is to poke fun at a person who acts like a wuss. 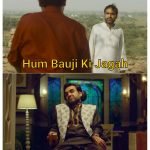 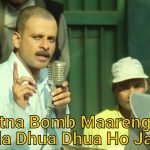