The Raha Nahi Jata meme originates from the 2006 Indian movie Bhagam Bhag. In this movie, Gulab Singh Lakhan Singh Haryanewale (the character played by Rajpal Yadav) says this dialogue when Babla (the character played by Govinda) asks him to arrange a heroine for their theatre group which the taxi driver wrongly interprets as a requirement of a prostitute. Then, the driver says, “Aeey Heyy Raha Nahi Jata Tadap Hi Aisi Hai.” The popular use of this Raha Nahi Jata meme is to poke fun at someone for being an addict. 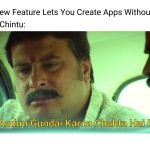