The Aap do na meme originates from the 2006 Indian Hindi-language film Chup Chup Ke directed by Priyadarshan. In this Bollywood movie, Bandya Lal (the character played by Rajpal Yadav) says this dialogue to one of the ladies of the family of Prabhat Singh Chauhan (the character played by Om Puri) when the former initially refused to take food since he wasn’t able to understand Gujarati language. The English translation of Aap do na is you give. The popular use of the Aap do na meme is to mock someone for asking for something. 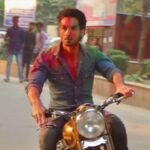