The origin of the Binod meme is when Indian Youtube pair Abhyudaya Mohan and Gautami Kawale uploaded a video titled “Why Indian Comments Section is Garbage” on their channel Slayy Point. In the video, Abhyudaya Mohan showed many screenshots of what the Indian Internet community posts in the comment section of Youtube videos. One of the screenshots from the video which went viral is a Youtube user “Binod Tharu” who just wrote Binod as a comment in a youtube video. Soon, youtube users started posting “Binod” comments on all Youtubers live streams which started the trend of Binod meme.

About the Youtube user Binod Tharu
The details of the user are unknown but the Tharu people are an ethnic group indigenous to the Terai in southern Nepal (mostly in Bheri and Lumbini) and northern India (mostly in Bihar, Uttarakhand, and Uttar Pradesh states).

About the action of Binod:
This youtube user isn’t the first person to post his own name in the comment section. He must have imitated the idea from somewhere else or seen someone else doing the same thing. The psychology behind imitation is when we are uncertain about our own course of action or when uncertainty looms over our decisions. It generally occurs when we are trying to fit in.

About the trend:
Since the youtube channel, Slayy Point roasted it pretty awesomely the users couldn’t hold themselves from repeating the same task as performed by the (not) original user. Of course, it is funny and irritating to others but we are just copying. 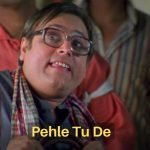 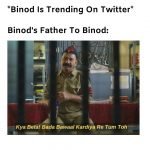