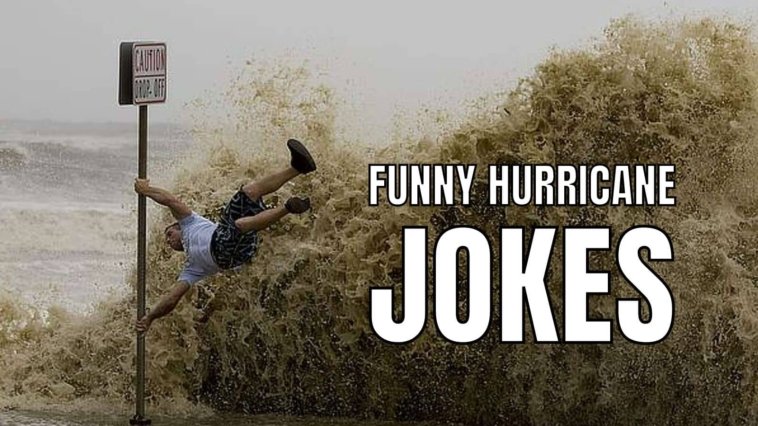 Hurricanes, also known as tropical cyclones, are low-pressure systems that form over tropical or subtropical waters to have organized thunderstorm activity. Warm ocean waters provide them with this energy. Surface winds move in a circular motion as storm systems intensify into hurricanes. These rotating winds cause the formation of the hurricane’s characteristic “eye,” the calm, clear center of the storm. The eye is surrounded by the eyewall, which is where the strongest winds blow.

These storms with 74 mph winds are most deadly in countries like China, The Philippines, Japan, Mexico, The United States, Australia, Taiwan, Vietnam, Madagascar, and Cuba.

So if you or your friends are preparing for storms in one of these countries then we have a list of Hurricane Jokes that are electrifyingly funny.

Hurricane Ian is no joke… but everything else on this page is.

What is the benefit of buying property in the metaverse?

No risk of hurricanes.

How are women similar to Hurricanes?

Because when they come, they are wild and wet. But when they leave, they take your house and your car.

Remember, if your apartment is hit by a dolphin, do not go out to see if the dolphin is okay.

That’s how the hurricane tricks you into coming outside.

Why are some hurricanes named after men?

They’re noisy, make a huge mess, and if you look into their eyes, there’s nothing there.

Why can’t HumorNama create a lot of Hurricane jokes?

We are scared that our comment section will be flooded.

Name that thing Hurricane Death Megatron 900 and folks will be evacuating like they need to.

What happens to a sailboat in a category 5 hurricane?

Where do squirrels go in a hurricane?

All over the place.

Why should you just name hurricanes after politicians?

That way you wouldn’t have to worry about them actually coming through with anything.

What do you call a walking stick that makes you walk faster?

Have you heard about the street performer who did his act in the middle of a hurricane?

Following a devastating hurricane, a politician visited a village in Haiti.

When he arrived, he inquired about their requirements.

“We have two basic needs, sir,” the villager replied.

“First and foremost, we have a hospital, but no doctor.”

When the politician heard this, he took out his phone and called the village leader, assuring him that the doctor would arrive the next day.

He then inquired about the second issue.

“Secondly, sir, there is no phone service in the village,” replied one of them.

What do Kim Kardashian and Hurricane Sandy have in common?

They will both blow the entire east coast just to get on TV.

Would a hurricane close its doors in your face?

No, but a Lakewood.

What did the well-intended but lazy pimp tweet out after a hurricane?

“I’m sending my thots and prayers.”

What do you call a cow stuck in a hurricane?

What do you call a hurricane that hits Puerto Rico?

Why are hurricane winds so fast?

Because if they weren’t, they’d be slowicanes.

25% of your roof has been blown off due to a hurricane. What’s your response?

What would we call a hurricane after gender reassignment?

Why is the letter ‘i’ the calmest in the word ‘hurricane?’

Because it’s the eye of the storm.

Three men arrive at a Caribbean beach resort and quickly start talking about their lives and how they got there.

“I used to run a successful business in the Midwest. One day, unfortunately, there was a huge fire and my entire warehouse burned to the ground. I collected the insurance on it and decided to move here,” the first man says.

The other two give a sympathetic nod.

The second one says, “I have somewhat a similar story too. I used to own a jewelry store in Los Angeles, but it was destroyed in a massive break-in one night. I collected the jewelry insurance and relocated down here to settle.”

They both look at the third person. He begins, “On the East Coast, I used to run a small fishing business. Unfortunately, a hurricane ruined everything last year. I got my insurance and came here.”

The first two guys look at each other for a minute. Finally, one says to the third one, “How do you start a hurricane?”

What did one Tropical Storm say to the other?

“I used to be a hurricane but now I’m depressed.”

Isn’t too early for hurricane jokes?

Wait for everything to blow over first.

What is the difference between a woman and a hurricane destroying your life?

What do a tornado, a hurricane, and a redneck divorce have in common?

What did the hurricane say to the palm tree?

A hurricane is on its way to a small town. According to the news, everyone should evacuate. “I’m not going to leave my home,” a religious man in town says, “God will protect me.”

The hurricane strikes, and it is devastating. There is widespread flooding, and the police arrive at the man’s door to inform him that he must leave. “I’m not afraid; God will protect me,” the man says, and the cops abandon him.

As the water level rises in his home, the man is forced to scale the roof. Just then, a National Guard boat passes by and orders him to board. “I’m not afraid, my God will protect me,” the man says, refusing to board the boat. The National Guard is eventually forced to give up and move on to assist others.

The man then drowns.

When he arrives at the pearly gates, he encounters God and asks, “God, why didn’t you protect me?”

God sighs and says, “I sent you the news, the police, and a boat. What fucking more do you want?!”

What did the hurricane say to the island?

What do you call a weak hurricane?

Why shouldn’t you stare at hurricanes for too long?

You’ll get lost in their eyes.

What do you call 2 hurricanes that look exactly the same?

What’s the difference between a hurricane and an old car horn?

One blows hard while the other hardly blows.

A man walks into a brothel and informs the madam that he is looking for something new and exciting.

“Well, we have one girl who is a contortionist,” the madam says.

“No, that’s too ordinary,” the man says.

After a brief moment of thought, the madam says, “How about a Hurricane Gussy? Have you ever tried that?”

The man becomes excited and says, “No, I haven’t. Let me try one of those.” He then goes upstairs to a room, removes all of his clothes, and waits.

A tall, beautiful woman walks into the room. She begins to jump around, wave her arms, and blow as hard as she can.

The man says “What the hell are you doing?”

“I am Hurricane Gussy, and these are the hurricane winds,” she says.

Then she walks up behind him and begins beating him over the head with her breasts.

“Now what the hell are you doing?” says the man.

“These are the coconuts that fell from the trees as a result of the hurricane,” she explains.

She then stands over the man and begins peeing.

“What the hell are you doing?” says the man.

“This is the rain from the hurricane,” she says.

The man stands up and begins to dress.

“What the hell are you doing?” she exclaims.

“I’m leaving,” the man says, “Who can fuck in this weather?”

Hurry! Cane you run away from the storm?

A gust of wind over 74 MPH could be the start of a hurricane.

What makes a horse different from a hurricane?

One is reined up and the other rains down.

What are hurricanes with a central dense overcast over the eye called?

What did the tornado say to the hurricane?

What’s worse than a hurricane?

Does anyone know why scientists are having trouble tracking hurricane Jose?

A hurricane blew across the Caribbean.

It didn’t take long for one of the expensive yachts to be swamped by high waves, sinking without a trace. Only two people survived: the boat’s owner, Dr. Lucas, and the steward, Marcus, who swam to the nearest island. The steward was crying and upset when they arrived at the deserted strip of land, knowing they would never be found. Dr. Lucas on the other hand was quite calm, relaxing against a tree.

“Dr. Lucas, Dr. Lucas, how can you be so calm?” cried Marcus. “We’re going to die on this lonely island, Marcus; we’ll never be discovered here.”

“Sit down and listen to what I have to say, Marcus,” Dr. Lucas said confidently.

“I donated $500,000 to the United Way and another $500,000 to my church five years ago. I made the same contributions four years ago. And, because I did well in the stock market three years ago, I contributed $750,000 to each. Because business was good last year, the two charities each received a million dollars,” Dr. Lucas explained.

“So what?” exclaimed Marcus.

How was the hurricane that struck Africa good for them?

At least they have water now.

What is a Tropical Storm’s favorite song?

How do you get to the eye of a hurricane?

Look near the c.

What do you get if you cross a card game with a hurricane?

Why is it really hard to sneak up on a hurricane?

Because they’re always turning around.

Is your home prepared for Hurricane? Do you have bottled water, batteries, and canned goods? Is your car fueled up in case you need to flee? Do you have enough alcohol to last you the weekend? The only thing left to do is laugh. Laugh at the above Hurricane jokes and share them with your friends. It’s the most natural way to alleviate your waking nightmares unfolding in your backyard. 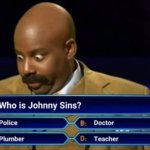 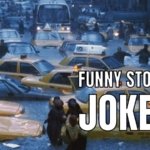