The Ab Humko Chahiye Full Izzat meme originates from Excel Entertainment’s 2018 web series Mirzapur season 1 episode 5. In this Prime Video series, Guddu Pandit (the character played by Ali Fazal) says this dialogue to the local grocery store owner (the character played by Satish Sharma) when Guddu’s mother complains about the store owner for showing lack of respect when talking with her. He says, “Ab hum wo guddu nahi rahe jo liber liber karte the. Ab hamari mummy ko chahiye full Izzat.” The popular use of the Ab Humko Chahiye Full Izzat meme is for a character who suffered a lack of respect. 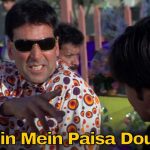