The Mithai Batwa Dijiye meme originates from the Excel Entertainment’s 2018 web series Mirzapur season 1 episode 9. In this Prime series episode, Munna Bhaiya (the character played by Divyendu Sharma) says this dialogue to Kaka, the peon of the Gajjumal college administration when he learns about his defeat to Gajgamini Gupta in the elections. He says, “Mithai batwa dijiye khushi ka mahol hai.” The popular use of this Mithai Batwa Dijiye meme is to express the idea of celebration. 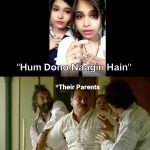