The origin of the Chup Bilkul Chup meme dates back to 21st February 2012 when The Viral Fever Released a video titled “Rowdies 9 – Sab Q-tiyapa hai !” The video serves as a parody of the Roadies reality TV show as Raghu-Rajiv character is played by Deepak Kumar Mishra and Naveen Kasturia played Rannvijay Singh. The popular use of Chup Bilkul Chup Meme is to shut someone down. 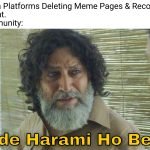 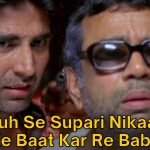