The Ye badi achi baat kahi aapne meme originates from the 2006 Indian Hindi-language film Chup Chup Ke. In this Bollywood movie, Gundya Lal (the character played by Paresh Rawal) says this dialogue when the police inspector told him that that the guy he caught in his fishing net can’t be left unchecked because his identity was not known. Gundya who was already interested in getting rid of the guy was impressed by the words of the police inspector but was disappointed when he was informed that without a registered complaint against him, the guy cannot be arrested. The English translation of Ye badi achi baat kahi aapne is you said it very well. The popular use of the Ye badi achi baat kahi aapne meme is to mock someone’s speech. 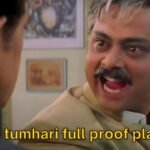