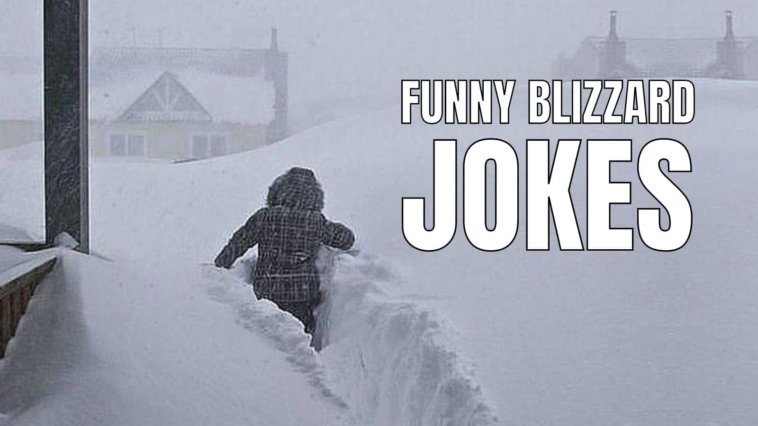 People often crack jokes about blizzards as a way to cope with the potentially stressful or challenging situations that they can bring. Blizzards can cause disruptions to everyday life, such as power outages, difficulty traveling, and the need to shovel and clear snow. By making jokes about the storm, people can lighten the mood and find a bit of humor in an otherwise difficult situation.

What did the jalapeño say in the blizzard?
“I’m a little chili.”

Why is Blizzard so quick to resort to censorship?
Because they’re nothing more than a bunch of snowflakes.

What do you call a whistleblower stuck in a blizzard?
Snowd-en.

What did Hagrid say after he cremates Harry Potter and throws his ashes into a snowstorm?
“You’re a blizzard, Harry.”

Did you hear about the farmer who left her sheep out in the blizzard?
She had to take them to the Icy Ewe ward.

What do you call two idiots in a blizzard?
Numb and Number.

What’s the coldest type of reptile?
A blizzard.

How do you find Will Smith in a blizzard?
You just track the fresh prints.

What did the Eskimos say about their igloo during the blizzard?
“We better get inuit.”

What’s something you looked forward to as a kid but now don’t like?
Blizzard.

A blonde is stranded in a blizzard. When the small blonde got home from work, it was snowing severely and blowing so hard that visibility was virtually non-existent. She walked to her car, wondering how she was going to get home.
She sat in her car, warming up, thinking about her dilemma. She finally remembered her father’s advice to wait for a snow plow to come by and follow it if she was stuck in a blizzard. She wouldn’t get stuck in the snow drift that way. This made her feel much better, and soon after, a snow plow passed by, and she began to follow it. She was feeling extremely smug as she followed the snow plow, and she wasn’t having any problems with the blizzard conditions.
After a while, she was astonished when the snow plow stopped and the driver got out, returned to her car, and beckoned for her to roll down her window. The snow plow driver was concerned since she had been following him for quite some time. She responded she was OK and told him about her father’s advice to follow a snow plow if they were stuck in a blizzard.
The driver replied that it was okay with him and she could continue following if she wanted but he was done with the Walmart parking lot and was going over to the K-mart next.

How does a Snowman get to work during a blizzard?
By icicle.

What do you call a pop star in a blizzard?
Chilly Eilish.

Did you hear about the big blizzard that hit the Canadian Prairies last week?
It’s flake news.

How do you breathe in a blizzard?
By inhailing and exhailing.

Knock, knock.
(Who’s there?)
Snow!
(Snow who?)
Snow laughing matter! It is a blizzard!

What does nuclear war look like in a blizzard?
Unclear.

What did the pervert do during the blizzard?
He started plowing the roads.

A man awoke early in the morning and kissed his wife good morning and goodbye. As his car warmed up in the driveway, he made a thermos of coffee and a thermos of hot soup. He gathered his fishing equipment and drove out to the lake for some ice fishing.
As he drove along the road, he realized how bad his visibility was. He decided it was too hazardous and returned home.
He returned to his residence quietly. He snuck up the stairs, undressed, and changed into his long johns. He climbed into bed next to his sleeping wife.
Sleepily she said, “I didn’t expect you so soon.”
He whispered in her ear, “It’s a frigging blizzard out there. It’s a mess.”
His wife whispered back, “Yeah, can you believe my idiot husband is out there fishing right now?”

What do you call it when a lizard gets lost in a snowstorm?
A blizard.

What type of storm does the easter bunny love?
A Nor’ Easter Jokes.

Why are blizzards so awesome?
They’re snow much fun.

Jack chose to go skiing with his friend Bob.
They piled into Jack’s minivan and drove north. After a few hours of traveling, they were stuck in a horrible blizzard. They parked at a nearby farm and asked the lovely lady who answered the door if they might stay the night.
“I realize it’s bad weather out there, and I have this huge house all to myself,” she explained. “If I let you stay in my house, I’m scared the neighbors would gossip.”
“Don’t be concerned,” Jack said. “We’ll gladly sleep in the barn. And if the weather improves, we’ll be out the door at first light.”
The lady agreed, and the two men made their way to the barn to spend the night.
The weather had cleared by morning, and they were on their way. They had a fantastic skiing weekend.
Jack received an unexpected letter from an attorney around nine months later.
It took him a few moments to figure it out, but it was from the attorney of the gorgeous widow he met on the ski weekend.
“Bob, do you remember that good-looking widow from the farm we stayed at on our ski vacation up North?” he asked his friend.
“Yes, I do,” Bob replied.
“Did you happen to wake up in the middle of the night and go up to her house?”
“Yes,” Bob admitted, a little ashamed at being discovered. “I must admit that I did.”
“Did you ever use my name instead of telling her your name?”
Bob’s cheeks flushed as he exclaimed, “Sorry about that, buddy. Unfortunately, I did. Why do you ask?”
“She just died and left me everything.”

What happens to a turtle during a blizzard?
It finds a shell-ter.

What do snowmen like to do during a blizzard?
Chill out.

Knock, knock.
(Who’s there?)
Scold.
(Scold who?)
Scold outside during a blizzard!

What is the most popular breakfast during a blizzard?
Frosted flakes.

Two Eskimos were traveling in a kayak when a sudden blizzard blew in.
Trapped with no way to see which way was home, they started freezing to death.
One of them had a bright idea to light a fire in the bottom of the boat to keep warm.
Unfortunately, it burned a hole in the bottom of the boat. The boat sank, proving once and for all that you can’t have your kayak and heat it, too.

Where does a snowman go dancing during a blizzard?
A snow ball.

What is the best adult drink during a blizzard?
Iced tea.

What is a great lesson for the day after a blizzard snow day?
Snow and Tell!

A guy is driving through a blizzard in Alaska when his car breaks down so he gets it towed to the nearest mechanic.
As he awaits the diagnosis he steps out for a smoke. He walks back in after smoking and a few moments later the mechanic comes out and says to him, “Um…it looks like you blew a seal.”
To which the man responds, “Oh Nah, that’s just some frost on my moustache.”

What is the finest blizzard drink?
Long Island Iced tea.

What do you call ten Arctic hares hopping backward through a blizzard together?
A receding hare line.

The young new pastor made his way to the rural church in the middle of a blizzard one Sunday morning in February, arriving with only five minutes to spare. He entered, turned on the lights, and took a look around. There was no one else present.
An old farmer, coated in snow, strolled in just as he was ready to turn everything off and go home.
The preacher said, “Hello, Joe. Nobody else appears to be able to make it. I believe there will be no service today.”
“Well, Reverend, I know I’m only an old farmer, but I can tell you this: if I take a load of hay out to the field to feed my cattle and only one cow comes up, I still feed it,” the elderly farmer stated.
Embarrassed, the pastor answered “Without a doubt. You are correct. I’m going to get ready.”
So the pastor began the service and, inspired by the farmer’s faith and dedication, preached for an hour.
After the service, the pastor approached the farmer and said, “So Joe… I hope you enjoyed today’s sermon.”
The old farmer looked at him, shook his head, and said, “Reverend, if I go out to feed the cattle and only one cow shows up, I still feed it, but I don’t give it the whole fucking load.”

What is the most popular blizzard snack?
Ice Krispies treats.

What do you call a litter of young dogs who have come in from a blizzard?
Slush puppies!

An Amish couple is traveling down the road in their horse and buggy during a blizzard.
The woman notices a skunk in the road. “Honey, pull over, he must be freezing!” she says to her husband.
So the husband pulls over, the wife gets out, retrieves the skunk, and they continue on their way.
After about 5 minutes, she turns to her husband and says, “He’s still shivering, honey! How should I proceed?”
“Oh, put him up your dress, he’ll be warm then!” said the spouse.
“Oh honey, what about the scent!” moans the wife.
The husband responds, ” Pinch his little nose, he’ll be okay!”

Snowy Owls enjoy what kind of math during a blizzard?
Owlgebra.

Have you got a better Blizzard joke? Please leave your snowstorm puns and one-liners in the comments section! 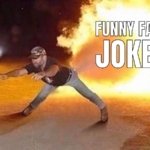