The Ajii Lund Mera meme originates from the 2020 YouTube video titled “YouTube Vs Tiktok – The End” uploaded by Indian Youtuber CarryMinati which became the first and the fastest Indian YouTube video to reach 10 million likes and broke several more records in the way. Among many memes, the above one became a viral whose popular use is to show emotion that is bound not to happen. 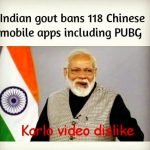 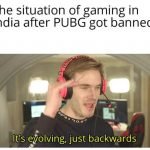