The Hum Bhi Pele Gaye The meme originates from the 2018 Excel Entertainment’s Web series Mirzapur Season 1. In this Amazon Prime Video series, Rati Shankar Shukla (the character played by Shubrajyoti Bharat) says this to Bablu Pandit (the character played by Vikrant Massey) and Guddu Pandit (the character played by Ali Fazal) when the don of Jaunpur tries to convince the boys to join him. He says, “Hum bhi kaam karte the Tripathiyon ke liye. Tum bhi karte ho. Hum bhi loyal the. Tum bhi loyal ho. Hum bhi pele gaye the. Tum bhi pele jaoge.”. The popular use of Hum Bhi Pele Gaye The meme is to mock someone of the consequences when following a familiar path. 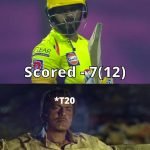 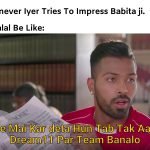