The Meri Shaktiyon Ka Galat Istemaal Kiya Gaya Maa meme originates from the 2006 Bollywood movie Krrish. The screenshot which went viral involves Rohit Mehra (the character played by actor Hrithik Roshan) saying the iconic dialogue to his mother when he learns about his future death by Dr. Siddanth Arya (the character played by actor Naseeruddin Shah). 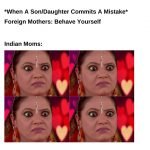