The Mujhe Kyun Toda meme originates from the 2007 Bollywood movie Welcome. In the movie, Municipal officer Purushottam Bhan (the character played by Paresh Ganatra) says this dialogue to Uday Shetty (the character played by Nana Patekar) when his goons beat the municipal workers when they tried to remove the illegally constructed cabin on the cliff edge. The popular use of Mujhe Kyun Toda meme is to express distress for being targetted for someone else’s acts. 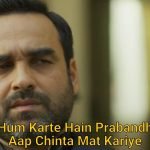 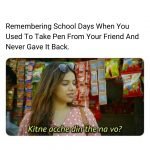