The Nahi karna tha meme originates from the 2007 Indian comedy film Dhamaal. In this Bollywood movie, Dev Kumar Malik (the character played by Vijay Raaz) says this dialogue to Boman Contractor (the character played by Aashish Chaudhary) and his father Nari Contractor (the character played by Asrani) while the duo contacts airline customer service provider to fly the plane after the actual pilot abandons the steer and collapses into alcoholism. In the first pane, DK Malik says enquires them about a red button. In the second pane, the father-son duo tell him that yes they can find it and have pressed it. To this in the third pane, the airline cs provider tells them it was not needed to be pressed. The English translation of Nahi karna tha is did not have to do it. The popular use of the Nahi karna tha meme is to mock someone’s mistake. 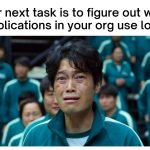