Is this some kind of a list of huge deer jokes? Yes! These magnificent jokes are on reindeer, a species of deer that live way up close to the North Pole, where it’s very cold. Reindeer actually goes by two different names. In North America, wild reindeer are called Caribou. In Northern Europe and Asia, they are called Reindeer.

Many people think of reindeer at Christmas time. Legend tells of a very kind man named Santa Claus or Father Christmas or Kris Kringle or Saint Nick who travels around the world on Christmas Eve, giving presents to good children. How does he manage this feat? With the help of a magical sleigh, pulled by a team of flying reindeer. We learned the names of these famous reindeer through an 1823 poem called “A Visit From St. Nicolas.” Their names are Dasher, Dancer, Prancer, Vixen, Comet, Cupid, Dunder, and Blixem.

In later works, Dunder’s name was changed to the more impressive Donner, which means Thunder in German. And Blixem became Blitzen because blitz means lightning in German. Thunder and lightning are a good pair. But what about the most famous reindeer of all? Rudolph the Red-nosed Reindeer joined Santa’s sleigh in 1939, according to the book by Robert L. May. Rudolph has a nose that glows red and allows Santa and the other reindeer to find their way, even when they’re flying through the fog. Now that you know about the Reindeer’s connection with Christmas, let’s read some jokes.

What do reindeer hang on their Christmas trees?
Horn-aments.

What do female reindeer do for fun?
Go into town and blow a couple hundred bucks.

Knock, knock.
(Who’s there?)
Olive.
(Olive who?)
Olive the other reindeer.

What’s the difference between Santa Claus and voter fraud?
One is a childish fantasy about getting what you want. The other has flying reindeer.

Yo mama so dumb, she thinks blitzkrieg is one of Santa’s reindeer.

You ever hear of Randy the Brown Nosed Reindeer?
He was as quick as Rudolph but couldn’t stop as fast.

How much does it cost Santa to park his sleigh and reindeer?
Nothing! It’s on the house!

Can you name all of Santa’s reindeer?
No, they already have names.

What is the purpose of reindeer?
It makes the grass grow, sweetie.

What does Santa do with a lazy reindeer?
Sleighs ’em.

Did you know Santa has only two reindeer?
Rudolph and Olive, the other reindeer.

How to get out of buying your kids Christmas presents?
Explain to them that due to Global Warming that the North Pole melted and that Santa and the Reindeer drowned.

Knock, knock.
(Who’s there?)
Rudolph.
(Rudolph who?)
Loving money is the Rudolph all evil.

How do reindeer fly?
They use their Missile-toes.

Why doesn’t Santa use reindeer milk in his coffee?
He prefers non-deery creamer.

Why is Santa’s reindeer allowed to spend Christmas together?
Because they have herd immunity.

How can you tell Rudolph the reindeer was male?
He was only liked when he was useful.

What is Hitler’s favorite reindeer?
Blitzen.

Do you know which animal comes from the sky?
Reindeer.

What street in France do reindeer live on?
Rue Dolph.

What is the world’s wettest animal?
The reindeer.

You’ve never heard of the 10th Reindeer?
The first eight are Dasher, Dancer, Prancer, Vixen, Comet, Cupid, Donner, Blitzen.
The 9th is Rudolph the red nosed reindeer, and the 10th is the jerk called Olive.
Why do they call him a jerk?
Olive the other reindeer used to laugh and call him names.

How does Santa choose which female reindeer to breed with his prized stud?
By choosing the one that’s the best bang for the buck.

What do reindeer have that other animals don’t have?
Baby reindeer.

What happens when you cross Santa Claus with five shots of tequila?
Grandma Got Run Over By A Reindeer.

What do you call a blind reindeer?
“I have no eye deer.”

Knock, knock.
(Who’s there?)
Reindeer.
(Reindeer who?)
It looks like rain, dear!

What’s the difference between a Knight and Santa’s reindeer?
The Knight is slayin the Dragon, and the reindeer are dragon the sleigh!

What did the reindeer say when Santa told him a funny joke?
“You sleigh me.”

What do you call a reindeer on Halloween?
A cariboo.

Where do you find reindeer?
It depends where you left them.

Do you know where reindeer come from?
Clouds.

What did the reindeer say to the elf?
Nothing, reindeer can’t talk.

What do you call Santa’s most impolite reindeer?
Rudeolph.

How many reindeer were left after Santa got stranded in the mountains?
Only one. Donner ate the rest.

What do call someone who takes care of reindeer and really enjoys it?
A Jolly Rancher.

What did Santa say to Mrs. Claus when he saw a thunderstorm?
“Looks like reindeer!”

What animal would make a good meteorologist?
A reindeer.

What do you call a notification reindeer?
Remindeer.

What does Santa call reindeer that can’t fly?
Dinner.

What do you call a reindeer with no eyes no legs and no mouth?
A snowman.

Do you know why Santa and eight reindeer couldn’t open his vehicle?
One horse open sleigh.

What did the reindeer say on the Roller coaster?
“Hold on for deer life.”

How did Santa’s reindeer look when they got 3 piece tailored suits?
Dashing.

What do you call an alcoholic reindeer?
Brew-dolph.

Do you know why Finnish reindeer herders are always calm?
They’re nomads.

What did the reindeer say to a kid before telling them a joke?
“This one is gonna sleigh you.”

What do you call a group of murdered reindeer?
Slaindeer.

What do you call a reindeer with a condom on its face?
Fuck nose.

Knock, knock.
Who’s there?
Rudolph
Rudolph who?
Run, run Rudolph, Santa has to make it to town

What did Santa say at the strip club?
“Make it reindeer.”

What reindeer game do reindeer play at sleepovers?
Truth or deer.

Which reindeer have the shortest legs?
The smallest ones.

What game does reindeer play in their stalls?
Stable-tennis.

What is Rudolph’s favorite day of the year?
Red Nose Day.

Have a better reindeer joke? Your own puns and one-liners can be written in the comment section below. 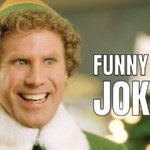