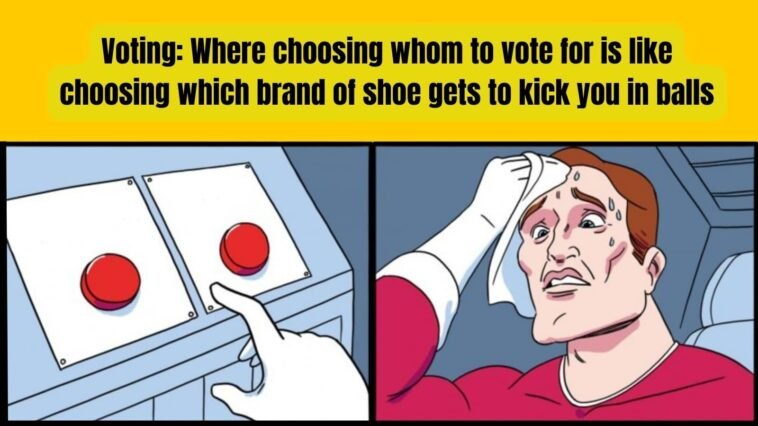 Every year’s election will undoubtedly be filled with hilarious sketches and parodies from Saturday Night Live and other late-night comedians, and the candidates’ actions and reactions. These might not affect the results, but sure gives the people of democracy some laughs. We have aggregated some of the best voting jokes that you can share with your friends and family who are going to vote this term.

We believe that we, the Earthlings, have a tendency to make witty jokes about any Big Thing that occupies a significant amount of time in our life (voluntarily or not) in order to make it more understandable and accessible. Even if you consider yourself apolitical, these amusing jokes are sure to make you laugh.

These funny jokes are suitable for people from the UK, the US, India, Australia, Canada, Indonesia, Brazil, Japan, Mexico, the Philippines and the rest 157 democracies in the world.

Where do ghosts cast their votes?
To the voting BOOth.

Why was the American not illegible to vote though he cast it every time?
It was not American Idol.

Why does electricity not like to vote?
It doesn’t want to elect ron.

Which country gets crowded with Americans on election day?
Poland – because they are told to go to the polls.

What does a horse say when he’s voting against a bill?
Neigh.

Why is your son Alex not voting in these elections?
He is 16.

Why should one vote for the person who promises the least?
He/she will be the least disappointing.

Why did the humorous ghost lose the elections?
Since he couldn’t scare up any votes.

Where do snakes go to cast their votes?
Near tadpoll.

What exactly is democracy? A boy is asked for homework in school.
“What is democracy?” the little boy asks his father at home.
Dad answers, “Umm, son, let me try to put it this way: I’m the breadwinner of the family, so let’s call me a capitalist. Because your mother spends the money, we’ll refer to her as the government. The nanny works at home for money; she belongs to the worker class. We are here to spend that money on you, the people. And your future baby brother in bed.”
So the little kid goes to bed, and when he hears his baby brother sobbing, he gets up to check on him and discovers that he has soiled his diaper severely.
So the child enters his parents’ room and discovers his mother fast asleep. He goes to the nanny’s room to avoid waking her. When he finds the door locked, he looks through the keyhole to discover his father in bed with the nanny. He gives up and returns to his bed.
The small boy goes to school the next morning. When the teacher asks if anyone got the answer to the homework he raises his hand, “Democracy is, while Capitalists are screwing the Working Class, the Government is sound asleep, the People are being ignored and the Future is in deep shit.”

Why should you vote for the FBI or NSA?
At least they’ll listen to you even after the elections.

Why did California legalize marijuana?
Since they had a HIGH voter count.

Why did the skid mark lose the election?
It ran a smear campaign.

Did you hear about all the horses elected to Congress?
They couldn’t pass any laws because they all kept voting neigh!

Did you hear about the results of the recent Ent election?
The alder statesman will remain at the elm, despite losing the poplar vote.

Do all fairytales start with “once upon a time”?
No, some start with “if I’m elected, I promise…”

Why is waiting for election results similar to waiting for a grade on a group project?
You know you did your part right, but you are worried the rest of you screwed it up.

What will the CEO of IKEA do if he was just elected Prime Minister of Sweden?
Assemble his cabinet.

What is common between election and erection?
A dick rising to power.

Why is bribery illegal in elections?
Because you actually get what you were promised.

Did you hear about the election for the water sanitation commission?
It was a runoff election.

How was president Xi elected?
He was highest in the Peking order.

What do you call an election ballot in Mexico?
Pick-o-de-guy-o.

Do you know why I’m voting for a block of cheddar this election?
Wanna make America grate again.

What’s similar between strippers and those who operate election booths?
They’re both poll workers.

Why did the dolphins elect a dictator?
Because they wanted to serve a greater porpoise.

Why is a swiss cheese got elected as pope?
Because it’s holey.

How do pigeons elect their leaders?
They don’t. A pigeon can only gain power through a coo d’état.

What kind of animal is allowed to work elections?
A polar bear.

Where does a bee go on election day?
To the pollen station.

Why do the trees have a better democratic system than the U.S.?
Because they elect their leader based on the poplar vote.

Why are nuns afraid to cast vote?
Because they don’t know WITCH box to check.

Why can’t Pepe, the Internet meme vote?
Because that would be voter fraud.

In Russia, you don’t vote for Putin…
Putin votes FOR you.

What’s crazy about the age limit for voting?
18-year-olds can vote but not drink however when you consider who they have to vote for, they might need a drink.

When it comes to voting, what is a horse’s main concern?
A stable economy.

What’s the best thing about voting in a democracy?
You get to choose who to put the blame on.

Why was the skeleton at the voting booth feeling lonely?
She couldn’t vote because she didn’t have any BODY to vote with.

Where do the Polar bears vote?
In the North Poll.

In America, you cast your vote.
In India, you vote your caste.

Is your refrigerator running?
If so, I may vote for it.

To teach kids about democracy, I let them vote on dinner.
They picked pizza. Then I made tacos because they don’t live in a swing state.

What is your favorite thing about being Russian?
Getting to vote in American elections.

What do you call a nomadic democracy?
A Roman Republic.

What do Japanese people do when they have an erection?
They vote.

How is democracy different from feudalism?
In a democracy, it’s your vote that counts, and in feudalism, it’s your Count that votes.

Why did the protons vote for Harry Potter to be president?
Because they didn’t want to elect ron.

Why do Chinese people love playing Among Us?
Because that’s the only place they can vote.

What do you call a pig that has given its opinion on the election?
Polled pork.

Why shouldn’t you vote for a chicken?
When their day is over, they’ll go for a coup.

Why are voting results inaccurate in Afghanistan?
It’s because of the tally ban.

What do you call a flawed democracy?
An electile dysfunction.

Why isn’t there democracy in North Korea?
Because every time they try to pronounce “election” everyone starts to giggle.

Where did the stripper go to vote?
She went to the Poles.

Why is the bra the most democratic piece of clothing?
It elevates the small ones, supports the big ones, and keeps the masses together.

Why is it hard for the Farm Committee to get a unanimous vote?
The horses Neigh everything.

What do you call a pig after it exits the voting booth?
Polled pork.

Hope you enjoyed these jokes on voting. Let us know if you have better election puns and one-liners in the comment box below! 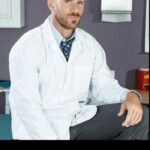