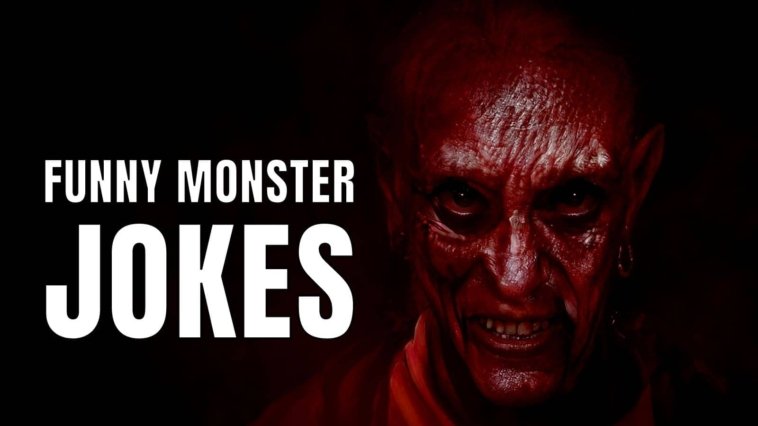 Halloween is quickly approaching! And nothing says Halloween like spooky and frightening monsters. Many of the Halloween customs that have been passed down through the generations contain some of the most horrible monsters and animals. Ghosts, goblins, ghouls, and witches are just a few of the supernatural beings that become more active during the Halloween season.

If you’re out with friends on Halloween, ask them what is a monster’s favorite summer drink? Demonade.  How do you get to the monster’s house? Walk down the street, then turn fright at the dead end. These monster jokes are guaranteed to make you laugh and are ideal for anyone who thinks themselves a pundit of dad jokes.

What does the Loch Ness monster eat?
Fish and Ships.

Pokemon GO is a blatant ripoff of which popular app?
Tinder, where you also swipe to find monsters in your area.

Why did the sea monster eat five ships that were carrying potatoes?
No one can eat just one potato ship.

What do you call a milk monster that wants to take over the universe?
Galactose.

Knock Knock!
(Who’s there?)
Harry.
(Harry who?)
Harry up there is a monster after me!

What do you call a monster made out of blood?
A hemogoblin.

What did one Australian Cyclops say to the other?
“Good Eye mate!”

Did you hear about the giant who threw up at the Halloween party?
It’s all over town.

How does a pirate greet a sea monster?
“What’s Kraken?”

What do you call a fake Flying Spaghetti Monster?
An impasta.

Did you hear about the monster with five legs?
His pants fit like a glove.

Villager 1: Flee for your lives! The mad scientist in the castle turned a tiny lizard into a monster that’s destroying everything in its path!
Villager 2: Meh, why bother? We’re doomed from the gecko.

Knock, knock!
(Who’s there?)
Ooze.
(Ooze who?)
Ooze that monster over there?

What do you call a South American goat-killing monster with a cold?
Achoopacabra.

Why would one think a show about children and monsters is weird?
Honestly, people have seen stranger things.

What did Mike Wazowski call his tattoo parlor?
Monster’s Ink.

What time did the Monster eat the prime minister?
8PM.

What did the monster say when he saw a full train during rush hour?
“Oh good! A chew, chew train!”

Is it okay to eat a lake monster’s vegetables?
Not Nessie’s celery.

Who’s home in Scotland can you walk into at any time?
The Lock-less Monster.

Which monster likes weed the most?
Medusa. She’s a total stoner.

Did you hear they caught the monster that was under my bed?
He was under a rest.

Did you hear about Albert Einstein, the genius?
You may not know but his brother Frank was a monster.

Did you hear about Frankenstein’s divorce?
Apparently, he couldn’t take Mrs. Frankenstien moaning anymore,
He said what tipped him over the edge was when they were having a Halloween get-together with all the other monsters Mrs. Frankenstein had set the table and made all the food, and before all the guests arrived she started having a go at him.
She started saying about how she’s done all this food and he’s done nothing to help or prepare, Frankenstein tried to interject but she wasn’t having it, she told him not to interrupt she carried on saying all the stuff he didn’t do and he tried to plead his case but she wouldn’t listen.
She said she’d had enough of him not doing anything, and this made Frankenstein angry. He just had to prove her wrong so he tells her, “I did the mash.”

Why did the monster go to the German pub?
To get a frank and stein.

What do you call a monster with great manners?
Thankenstien.

What were the monster’s first words after Dr. Franksenstein brought him back to life after sewing together different body parts?
“Thanks for re-membering me.”

Did you hear about Dr. Frankestein’s hard time creating his monster’s stomach?
It was gut-wrenching.

What is a monster’s favorite theme park ride?
The Roller Ghoster.

In the middle of the night, a four-year-old daughter entered his father’s bedroom and whispered, “I’m terrified, Daddy. Is it okay if I sleep with you?”
“No,” he said as he put her in her bed, “I’m not letting that goddamn monster follow you into my room.”

What is a duck’s favorite sea monster?
A Quacken.

Who won the dance contest at the Monsters’ Ball?
The Boogie Man.

A knight’s brother was slain in battle by monster
Knight: I will avenge the death of my brother!
Hunter: You have my bow!
Warrior: And my axe!
Mage: And my staff!
Necromancer: And your dead brother!

Why don’t monsters eat ghosts?
Because they taste like sheet.

What blood-thirsty creatures come out to play on Halloween?
The hemogoblins!

Why did the demon join Tinder?
He was looking for a ghoul-friend!

Why do seagulls attack witches on the beach?
Because they’re sandwiches!

What do zombie cows eat?
Graaaaiiinnnnsss.

Why did the scarecrow win an award?
He was outstanding in his field.

What’s 8 feet tall, has huge fangs and claws, breathes fire, and is knocking on the front door?
Don’t know, but guess you should run!

Did you hear about the man who after over two months of being chased by the scarecrow monster through the grain maze finally found the exit and escaped?
He barley made it out alive.

Why is it so hard to take sea monsters seriously?
Because they’re always Kraken jokes.

What was the first thing the monster ate after getting his teeth cleaned?
The dentist.

What do we call a monster we can’t find?
Wherewolf.

Did you know that werewolves prefer to eat cows?
Because they transform during a full moo-n.

Did you hear about a mixup with the organization of the Monster Mash this year?
Attendees said it was a freak event.

How do monsters discipline their kids?
They take away their scream time.

What do you call a sea monster with a handgun?
The Glock Ness Monster.

What do you call a big white furry monster with a six-pack?
The abdominal snowman.

What do you get when you cross a swamp monster with a bean?
The creature from the black legume!

Did you hear about the monster who took all the keys off the kid’s keyboard?
Now he is out of control and there’s no escape.

What did the monster say to his son after he hadn’t seen him for years?
“My how you gruesome.”

A young kid asked his friend who his favorite monster from any horror movie is while they were talking about them.
Friend says, “That’s a difficult one. I believe I’d have to go with the vampire from Sesame Street.”
The kid says, “What!? He doesn’t count.”
The friend replies, “Oh I assure you, he does.”

Why are monsters hipsters?
Because they’ve been coming out of the closet since before it was cool.

Why did the monster go to the barber?
Because they needed a scare cut.

Where do monsters buy their houses?
On Godzillow.

What kind of tea do monsters drink?
Monstrositea.

What did they serve at the Graveyard Bash where they were all doing the Monster Mash?
Goulash.

What monster do golfers fear the most?
The bogeyman.

What does the monster put on his bagel?
Scream cheese.

What do you call a Chinese swamp monster?
Chiang Kai-Shrek.

Who is the iconic tsundere monster?
Chew b-baka.

Why did the girl break up with her vampire boyfriend?
She realized his love was in vein.

How do you know golems make good musicians?
They’re monsters of rock.

What do you call a woman’s PMS?
Prehistoric Monster Syndrome.

What does a perverted monster do?
It swallows kids.

How do you remove a monster from the government?
Demonstration.

What do you call a big green monster you can put on your website?
The Embeddable Hulk.

What do you do to a green monster?
Put it in the sun to ripen.

Bob was swimming when a sea monster grabbed him by the balls.
“Plus 2 or minus 2?” said the monster.
“Plus 2!,” said Bob, but when he got out of the water he discovered he now had 4 balls. Bob was pissed with having 4 balls, but he figured he’d find the monster and this time say “minus 2” and return to normal, so Bob goes for another swim. After swimming around in the water for a while Bob is grabbed by the balls again, Bob was ready with his answer.
“Plus 4 or minus 4?”

Why did the baby mummy wander around the pyramid?
He was looking for his mummy

A superhero visits a village.
The village mayor rushes him, visibly distressed. “What’s going on?” the superhero inquires of the mayor. The mayor replies, “We have a monster nearby that eats a virgin woman every two days! Could you please assist us in defeating it?”
The superhero agrees and gets to work. Two weeks later the monster dies of starvation.

What has 1000 teeth and holds back a monster?
A zipper.

What do monsters turn on in the summer?
A scare conditioner.

Two monsters went to a Halloween party. Suddenly one said to the other, “A lady just rolled her eyes at me. What should I do?”
The other monster replied, “Be a gentleman and roll them back to her.”

Did you all hear about the one about the evil shapeshifter?
He turned himself into the police!

Why did King Kong climb the Empire State Building?
He had a plane to catch.

Do you have any better Halloween jokes about Monsters? Leave your own one-liners and puns in the comments section! 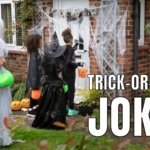 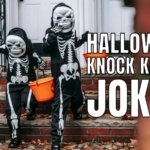