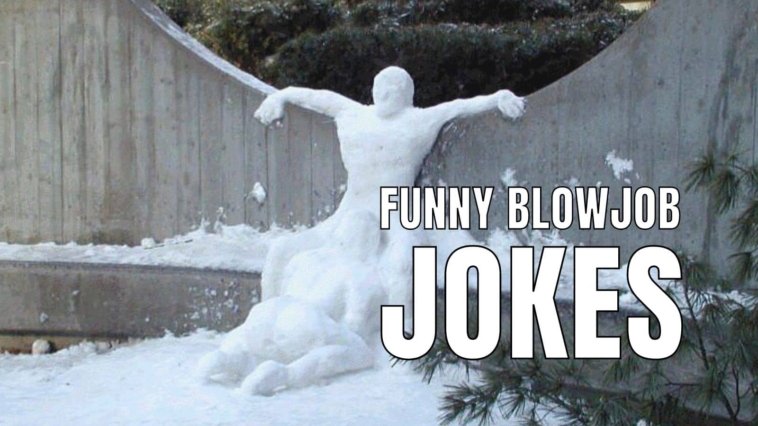 When it comes to erotica, everything sounds and appears sensuous, gorgeous, and effortless. But, when it comes down to it, a lot of work goes into creating the “ideal” sexual experience, and it’s not all rosy! Let’s admit that the art of providing a wonderful blowjob can do wonders for your sexual adventures if we’re talking about foreplay. Most people believe that it is a selfless gesture since you must truly love your partner to go down on them for their pleasure. But the truth is that we might appreciate it a little more than we admit. The best and most relatable anecdotes that stick with you for a long time, however, can come from the ugly ways in which the art of giving head can occasionally turn out!

What’s the difference between love, true love, and showing off?
Spitting, swallowing, and gargling.

Why do men love blow jobs so much?
It’s the only way to get inside a woman’s head.

Why does Dumbledore give the best blow jobs at Hogwarts?
Because he’s the headmaster.

What’s so good about an Ethiopian blow job?
You know she’ll swallow.

What do you call a blow job in the morning?
A head start.

What’s the similarity between getting a blow job from an eighty-year-old woman and walking a tightrope?
In both cases, you really don’t want to look down.

What do you call an equestrian that has never received a blow job?
A Headless Horseman.

Two married friends are out drinking one night when one turns to the other and says, “I honestly don’t know what else to do. When I get home from a night of drinking, I switch off the headlights before I get to the driveway. I turn the car off and roll into the garage. I remove my shoes before entering the house, slip up the stairs, and undress in the bathroom. I go off to sleep, and my wife still wakes up and shouts at me for staying out so late!”
His companion looks at him and says, “You’re clearly taking the incorrect approach. I rush into the driveway, slam the door, storm up the steps, toss my shoes into the closet, leap into bed, rub my hands on my wife’s thighs, and say, ‘How about a blowjob?’… and she’s always fast asleep.”

What do you call it when a boxer gives Dracula a BJ?
Going down for the count.

What do you call conversation during BJ?
Job Interview.

How is marriage like a hurricane?
It starts off with all the sucking and blowing then you lose your house.

A wife is fed up with all of the issues that need to be addressed in her house.
“Can you kindly fix the leak in the bathroom?” she asks her husband, who replies, “Do I look like a plumber?”
“Well, can you maybe fix the light in the living room, it’s been flickering for ages?” she says, to which he replies, “Do I look like an electrician?”
She asks him when she grows exhausted, “Can you at least mow the lawn?” she asks again. “Do I look like a gardener?” replies the gardener.
“Now leave me alone; I have to go to work.”
When he gets home from work, the leak is fixed, the light is no longer flickering, and the lawn is nicely trimmed, he asks his wife, “How did you do all this?”
“You know fat Henry down the road, I called him and asked him to do it for me,” the wife replies. The enraged husband says, “How much have you squandered now?”
“Nothing,” she responds flatly. “Henry said he’d do it for a chocolate cake or a blowjob.”
The husband says, “He does like his cake, old Henry.”
His wife replies, “Do I look like a baker?”

A man travels to Las Vegas to gamble and loses all his money. He doesn’t even have enough money for a cab, but he nevertheless pulled one down. He told the driver he’d pay him back the next time and offered him his phone number, but the driver said, “Get the fuck out of my cab.”
He walked all the way to the airport and back to his house.
Some time passes, and he decides to return to Vegas, where he wins big this time.
He packs his baggage and prepares to fly with all of his new winnings.
There is a queue of cabs, and at the end, he recognizes the driver from the previous time who booted him.
He stood there for a time, wondering how he could inflict payback on the driver.
So he gets the first cab. “How much does it cost to get to the airport?” he inquires.
“$15,” says the driver.
“Excellent, how much is a blowjob on the way there?”
“Get the fuck out of my cab,” says the driver.
So he moves on to the next one and asks the same question.
“How much is the airport fare?”
“$15.”
“Would you like a blowjob on the way there?”
That cab driver also asks him to get out of his cab.
He continues along the line of drivers, each one kicking him out. He finally reaches the last driver, the one from his previous trip.
He asks, “Hey how much to the airport?”
The driver replied, “$15.”
The guy hands him $15 and says, “Great let’s go!”
And so the driver leaves, slowly passing all the other drivers who are staring out their windows while the guy in the back smiles back with a thumbs up.

What do you call it when a midget gives head?
A below job.

How do you know if a whale is gay?
It is the one that bites off the end of a submarine and sucks all the sea men out.

What’s the difference between giving head and giving blood?
You have to be over 17 to give blood.

Why is the guy who can suck himself off such a narcissist?
Because he’s full of himself.

A guy is damned. The devil welcomes him and says “You must pick your suffering. Choose well because this will be your torment for all eternity “.
The man looks through hundreds of rooms but can’t decide until he comes across one in which a man is sitting on a couch watching football on TV while having a blowjob from a cheerleader.
“This is what I want to do for the rest of my life!” says the man.
“Are you sure?” asks the devil.
He yells, “Hell yeah!”
The devil goes up to the cheerleader and says, “You can stop now. I found someone to replace you.”

What does a Furry and a coin have in common?
They’ll both give you head and tail.

A man decides to get a pet for his family.
So he goes to a new pet store downtown that promotes exotic animals. As he walks throughout the store, he notices a frog on sale for $1,500 and asks the cashier, “Why is this frog so expensive?”
“Well, that sir isn’t just any frog, it’s a South American blowjob frog, it’s an uncommon species in the States, but they say that frog gives the best blow jobs,” the cashier giggles.
After giving it some thought, the man chooses to buy the frog and see if it lives up to the expectations, despite his belief that the salesperson is lying.
Later that night, the man’s wife returns home to find the kitchen in shambles, dishes all around, and her husband standing in the center of the kitchen, covered in flour, clutching the frog.
“What the hell is going on here?” the wife, perplexed, asks her husband.
“If I can teach this frog to cook, you’re out of here.”

Four generations of hookers were complaining about how little money they made at the brothel.
The youngest of them sighed and sat down, “These days, males complain that $50 is too much to pay for a blowjob!”
“Fifty bucks!” groans the middle-aged whore. “We were lucky to get $20 in the 1980s!”
The matronly old whore next to her laughs and throws her head back. “Ha! You’ve both been spoilt! Two dollars was the going fee in the 1950s! And we were overjoyed to have it!”
The skinny old grey-haired granny in the rocking chair puts down her knitting and wags a finger at them, “Bah to all of you! When I was a young lady back in the Great Depression, we were happy just to have something warm in our stomachs!”

Why did the vegetarian hate giving blow jobs?
She was a lesbian. 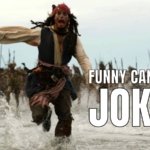