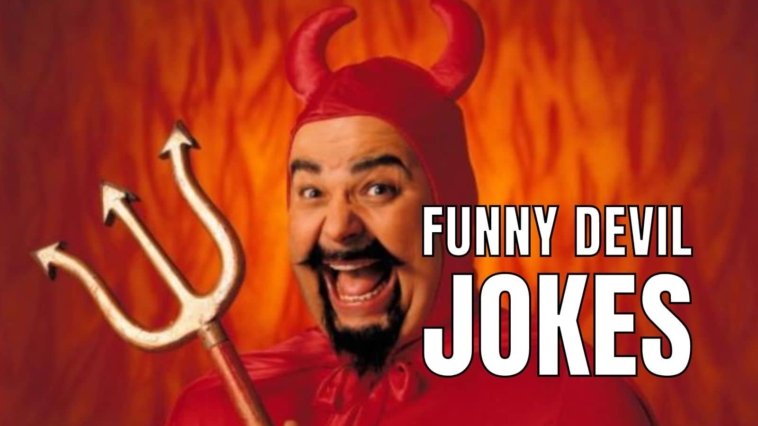 Do you ever want to summon demons without your mother crying at you to go to church and repent? It can all become very stressful at times! That’s why we compiled a list of Devil jokes worthy of Satan himself. While the concept of hell has traditionally been one of agony and eternal damnation, we have gathered these puns from all around the Internet to help you laugh off the devil if you come across him someday.

Why is the Church of Satan tax-exempt?
They’re a non prophet organization.

Did you hear about the wife who has evil lessons with Satan every week?
Don’t know how much she charges.

What do you call people who believe in Satan?
Christians.

What did the resident weatherman say when the devil asked him what the forecast was for the week ahead?
“Hail, Satan.”

What happens if Satan ever loses his hair?
There will be hell toupee.

Why is the devil in jail?
He was charged with possession.

What happened to Satan’s YouTube channel?
It got demon-itized.

What is Satan’s favorite headset?
S810.

How do you know Geometry is the work of Satan?
It makes people sin.

What is the best pickup line?
Hey girl, did you fall from heaven? Because you look like Satan himself.

Satan arrives to welcome a new damned soul to hell.
“Congratulations!”, he says, “You wasted your entire pitiful life!”
“Well,” the man replies, “at least I’m not an adult living in my father’s basement.”

Why did Satan cross the road?
Because he saw a group of Slayer fans approaching him.

What brand of vacuum does a satanist use?
Dirt Devil.

What is Satan’s favorite city in America?
Sin-sin-atti.

Why is the devil always mad?
Because he’s hot headed.

What shape did God make in the form of Satan?
A rektangel.

Did you hear about the satanic puzzle they found in the toilet?
It was a loo cipher.

God calls for Satan.
“Hey, I believe we misplaced an engineer and he wound up in Hell,” says God.
Satan replied, “Carl, you’re right. You’ve been doing an excellent job. We finally got an air conditioning system up and running, and the heaters were repaired. He even created an auto-poker system for the pitchfork teams.”
“Return him here; he belongs in Heaven,” instructed God.
“No way,” said Satan.
“I’m going to sue you for breach of contract,” shouted God.
The devil calmly replied, “And where are you going to look for lawyers?”

An angry wife says to her husband, “I should’ve married the devil he would’ve made a better husband than you!”
The husband replies, “You would’ve been arrested because marriage between relatives is illegal in this country.”

What is the devil’s favorite greeting?
Hello.

Why was the man thinking of becoming a Satan worshiper?
Just for hell of it.

Where does Satan wash his hands?
Helsinki.

A man dies and goes to hell where he meets the devil.
Devil says, “This is the lake of lava you will be spending eternity in.”
The man replies, “Actually since we’re underground, it would be magma.”
Devil says, “You understand this is why you’re here, right?”

Why is Satan always mad?
Because all his clients are late.

Why did the devil go to South Korea?
He was looking for Seoul to steal.

The townspeople were seated in their pews and chatted a few minutes before the ceremonies began. At the front of the congregation, Satan emerged out of nowhere. Everyone began shouting and sprinting for the front door, trampling each other in a desperate attempt to flee the embodied evil.
Everyone had left the church except for one elderly gentleman who sat comfortably in his pew without moving, seemingly unaware that God’s ultimate enemy was in his presence.
So Satan confronted the elderly guy and asked, “Don’t you know who I am?” “Yep, sure do,” the man replied.
“Are you scared of me?” Satan inquired.
“No, sure ain’t,” the man said.
“Don’t you realize I can annihilate you with a single word?” Satan threatened.
“Don’t doubt it for a second,” the old man replied calmly.
“Did you realize I could cause you tremendous, horrible, bodily torment for the rest of eternity?” Satan persisted.
“Yep,” the quiet response said.
“And you’re still not afraid?” Satan inquired.
“Nope.”
More than a little perturbed, Satan asked, “Well, why aren’t you afraid of me?”
The man calmly replied, “Been married to your sister for the last 48 years.”

Why shouldn’t you get caught behind Satan in line at the post office?
The Devil has many forms.

How does the antichrist keep his hands clean?
Hand satanizer.

What is Satan’s favorite thing to have for breakfast?
Deviled eggs.

A man is walking down the street on a Friday evening when the Devil appears in front of him and says, “Take all the money in your wallet, go to this casino, and put it on the number 27!”
The man is frightened at first, then curious, and immediately complies, goes to the casino, bets everything on 27, and wins!
He leaves the casino, where he meets the Devil again. “Take all your money – all that you’ve won – go inside and place them on 27!” adds the latter after a little pause. – “Again?!” – “Yes! Do it!” – The man instantly agrees, goes back in, bets everything on 27, and wins yet again.
Everyone at the casino is stunned now, they examine the wheel, no tilt or bias, it appears to be true luck, he’s given about two hundred thousand dollars reluctantly and leaves elated. Outside, he encounters the Devil again, who encourages him to put everything on 27, which he does and wins again!
And now that he’s been given the majority of the casino’s bank, millions of dollars, he walks out gleaming brightly and says to the Devil, “I don’t know why people think you’re the most sinister being there is, you’ve been amazing to me today!!”
The Devil looks at him strangely, pauses, and replies, “Well that may be true or not but you are definitely the luckiest motherfucking son of a bitch that I’ve ever fucking seen!”

What do you call a satanic rodent?
A sinchilla.

Why did the dyslexic elf get fired?
He kept writing “From Satan” on children’s New Year presents.

God and Satan agreed for Heaven and Hell to play a basketball game.
“I know we’re going to win,” God stated confidently. “All of the best players are here…Bill Russell, Kobe Bryant, Pete Maravich, Wilt Chamberlain, and others.”
“I wouldn’t count on that, God,” said Satan. “You see, down here, we have all the referees.”

What sort of tree does a Satanist buy for Christmas?
A Lucifer.

Why should you eat Satan’s vegetables?
Because it’s Hell-thy.

Why can’t Satan’s cheerleading squad win any competitions?
Because they have literally no chants in Hell.

Why did Satan tear the shoe in half?
Cause he just wanted the sole.

Why does satan hate geometry?
Too many angles.

What’s the name of a mythological figure, who takes your presents away?
Satan Claus.

A lawyer was working in his office when Satan appeared. “I can make it so you win every case in your career and make huge piles of money. In exchange, you will give me your soul, your wife’s soul, your children’s souls, your parent’s souls, your grandparent’s souls, and the souls of all your friends!”
The lawyer thought it over for a moment and then asked, “What’s the catch?”

Why did the vegetarian go to hell?
Because he loved Seitan.

How did Micheal throw Lucifer in Hell?
With his Judo-Christian values.

How does Satan measure mass?
Pentagram.

Do you think Satan can ban gambling?
No chance in hell.

What do you get if you cross Lucifer with a bee?
A pollen angel.

What is the name of Satan’s long-lost brother?
Sacos and Sasin.

What happened to the Spanish Satan who ate too much sugar?
Now he has Diabloetes.

What’s the difference between satan and a priest?
Satan needs consent to enter someone’s body.

How did you know Satan was going to Europe?
The flight from SIN to HEL vanished in Finnair.

Why does Satan not eat the Pizza bone?
Because he’s the Anti-Crust!

What if Satan took command of a naval fleet?
Then it would be Devil warship.

What’s the difference between Satan and Santa?
They’re a letter apart.

What is inverse exorcism?
When you have to summon Satan to get the priest out of the boy.

How can an orphan have a family dinner?
They have to die first and hope satan will allow a family reunion in hell.

Have a better joke on Devil and Satan? Post your Lucifer puns in the comments below. 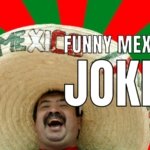 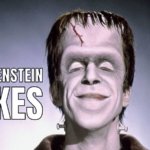