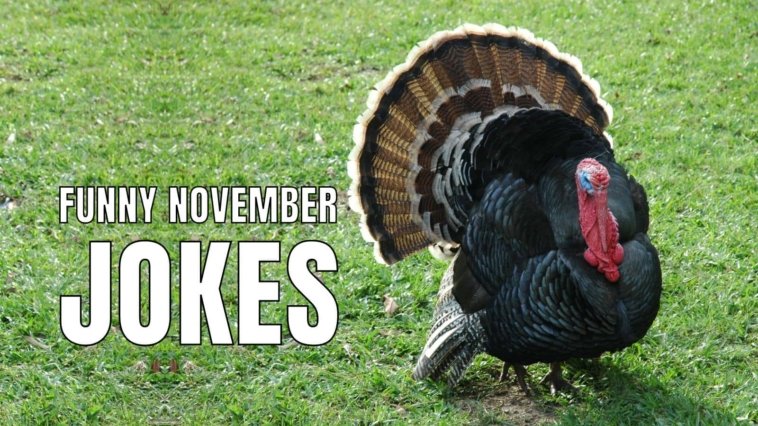 November is all about the end of fall, with shorter days and cooler temperatures. And, of course, Thanksgiving and the beginning of the holiday season. It is the month of solemn events such as Remembrance Day as well as joyous celebrations such as Hanukkah and the irreverent Guy Fawkes Night. Look no further if you’re looking for some great November jokes. We have compiled the best puns on the 11th month of the year.

Keep the festive cocktails flowing and a few Thanksgiving jokes on hand to keep the laughs coming.

What do Greek comedians and Americans in November have in common?
They both enjoy roasting Turkey.

What do you call someone who commits arson in late November?
A Sagi-terrorist.

What is the most common question the Finnish detective asks a suspect?
“What were you doing the night between November and May?”

Did you think that No Nut November is bad?
Wait until No Net December.

What happened in November when the turkey got into a fight?
He got the stuffing knocked out of him.

Remember John’s childhood crush?
Both are finally getting married this year. He in August, and her in November.

What time of the year do most squirrels die?
No nut November.

Some really hate that SEPTember, OCTober, NOVember, and DECember aren’t the 7th, 8th, 9th, and 10th months……!
Whoever fcked this up should be stabbed!

Why is No Nut November so goddamn boring?
It is probably the most anticlimactic month.

If you eat too many salted pretzels on Halloween, what happens the next day?
November thirst.

Did you hear about the neighbor guy who took up the No Nut November Challenge?
It is going great so far. Every time he thinks about eating almonds, he just masterbate. It’s not hard.

Did you hear about the kid who was fed peanuts and almost died?
Guess some people take No Nut November way too seriously.

What’s the opposite of November?
Yesvember.

What happens when cranberries get sad in November?
They turn into blueberries.

What happens when you fail at No Nut November?
Nuttin’.

Aren’t you surprised that we didn’t see any “5th of November” images?
Apparently, with everything going on, we had no Fawkes to give.

Why did the sperm cross the road?
Because it’s no longer November, and the guy left his window open.

Mommy, why am I getting Christmas presents in November?
Because it’s cheaper than chemotherapy.

A wife said t her husband that they should spice up their love life.
“What do you mean?” he asked.
She said, “Let’s do a bit of role-playing. I’ll be the doctor and you be the patient.”
“Alright…” the husband went with it, “How are you, doctor?”
“We have no appointments till November. Goodbye.”

What are you doing after November?
Nuttin’ much.

Who will survive No Nut November the longest?
The people with a severe nut allergy.

What do people who failed the No Nut November challenge generally say?
“I didn’t fail No-Nut November… I just finished the challenge 29 days early!”

What did King Arthur say when his wife asked if he failed No Nut November?
“Yeah, I Camelot.”

Why is it difficult to follow no nut November?
Well, it gets increasingly ‘hard’ as the days pass by.

What’s the best dance to do in November?
The turkey trot.

Why did the squirrel fall dead from the tree?
Because it’s No Nut November.

What did Freddie Mercury say when he was informed about the November challenge?
“Nutting really matters to me.”

Why No Nut November challenge is not gonna be a problem for most kids?
It’s not hard at that age.

If Yo Bday in November that means Yo Mama got f#cked In February for her taxes.

What do you call the 1st of November?
Octover.

During November, why was the turkey put in jail?
The police suspected fowl play.

How do you know Santa most definitely passed No Nut November?
He only comes in December.

Why can’t you beat No Nut November?
Cause if you beat it you lose.

Did you hear that everyone hates Nick’s facial hair for No Shave November?
But it’s growing on him.

What is the best example of the importance of pushing one another to achieve goals in a relationship?
Someone’s wife seems intent on helping him succeed at no-nut November, whether he likes it or not.

How do crypto traders call No Nut November?
HODL it.

What month is a hooker’s biggest fear?
November.

November is a hot month.
Not as hot as Novfire but much warmer than Novashes.

Which holiday is Dracula’s favorite in November?
Fangs-giving.

When is the best time for musicians to take time off?
No Note November.

What’s the difference between your meat and your game controller?
You stop ragefully beating your meat in November.

Did you hear about the girl who opened a pistachio shell, and there was nothing inside?
Even Mother Nature is participating in NNN.

Do you know why there is a “No Fap November”?
It makes for a good white Christmas.

Why can’t you bring a turkey to church during the month of November?
They use fowl language.

What’s a potato’s favorite game to play in November?
MASH.

How did the salt and pepper welcome all the guests in November?
By saying, “Seasoning’s greetings!”

Have a better joke about November? Please share your puns in the comments space below. Also if you are looking for the jokes of next month, you can head to December jokes now! 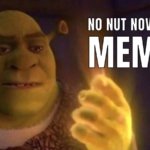 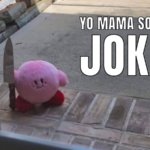