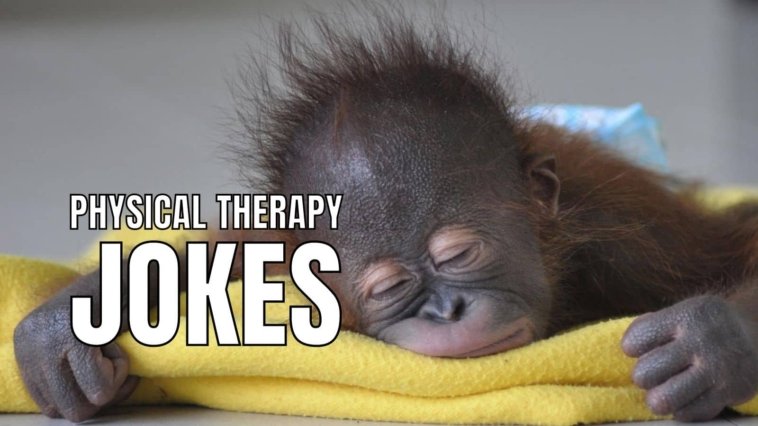 Once upon a time, there was a husband and wife who quarreled frequently. One day, the husband asks his wife for a head massage like he usually did. The wife wondered who gave him head massages before their marriage. The husband replied, “Well, no one did, since there was no headache.”

Physical therapy, while beneficial, is not always great. It can get boring and dull at times. It can cause mild discomfort and pain in some cases. If you’ve been doing physical therapy, you’re probably all too familiar with those feelings. But it’s not all glim. You have scenarios when the patients call their therapist out on being on the wrong side and he just plays it off and tells them,” Oh I know, I just like to have something to compare your other leg too.”

Now, to cheer you up and make your life more humerus, we’ve compiled a list of the best physical therapy jokes. Read on!

Why did the wife finally start swimming for PT exercises?

It gave her a sense of porpoise.

What is the difference between Occupational Therapy and Physical Therapy?

PT will help you walk while OT will make sure you can do it with pants on.

Why can’t you trust acupuncture specialists?

They’ll always stab you in the back.

Where do obstetricians do their PT exercises?

Why was the Physical therapist fired?

He rubs people the wrong way.

Patient: My knees don’t help me much.

Physical therapist: Well, did you ask your nephew?

Did you hear about the elderly guy who died of a fatal heart attack at a massage parlor?

They said he came and went at the same time.

What happened when the man went to the acupuncturist?

When he got home his voodoo doll was dead.

What do you call a farmer with a physical therapy degree?

What happened to the guy who kept saying that physiotherapy doesn’t work?

What happened when the patient learned that her electro therapy was free?

Two women were golfing. The first lady teed off and watched in horror as her ball flew directly into the path of a foursome of men playing the next hole.

One of the men was struck by the ball. He immediately clasped his hands at his groyne, collapsed to the ground, and began rolling around in pain.

The woman rushed down to the man and began to apologise right away. ‘Please allow me to assist you. ‘I’m a Physical Therapist, and I know I could help you with your pain if you let me,’ she explained.

“‘Oh, no, I’ll be fine.’ In a few minutes, I’ll be fine “The man responded. He was clearly in pain, lying in the foetal position with his hands clasping his hands there at his groin.

He eventually agreed to let her help because of her persistence. She gently took his hands and laid them to the side, loosened his pants, and slowly and carefully inserted her hands inside. She then gave a tender and skilled massage for several long moments before softly asking, “How does that feel?”

“Feels wonderful,” he replied. “But I still think my thumb’s broken!”

Are you a transfer belt? Cause you make me feel safe.

Where do people in Egypt go for physical therapy?

Why did the pig visit the Physical Therapist’s clinic?

It pulled a hamstring.

Sorry, I can’t tell you that.

Do you want to invest with me in a chiropractic center?

It will be a joint venture.

What do you call someone who only hires male masseurs?

What kind of Physical Therapy exercise do lazy people do?

Did you hear about the woman who was robbed by an unemployed acupuncturist?

She was stabbed more than 167 times but she felt awesome the next day.

A man visits a massage parlour in search of a happy ending.

He enters and meets with his massage therapist, a middle-aged Asian woman who isn’t entirely unattractive. She leads him into the room, lights a few candles, and then exits to allow him to undress. He does so and falls asleep on the table.

She returns and starts massaging his back and buttocks, which makes him aroused. She asks him to roll over after a few minutes and notices a large bulge beneath his towel.

“Oh! You want wanky? “She inquires, and the man responds emphatically. The therapist smiles and steps out of the room, signalling him with one finger.

The therapist finally returns, and peeking her head into the room, she asks, “Are you done?”

Did you hear about the Physical Therapist who asked his date to meet him at the gym?

She didn’t show up and that’s when he knew they weren’t gonna work out.

Why did the pastor encourage his entire congregation to go to an acupuncturist?

So, that they would become more holy.

What happens to a book when it starts to exercise a lot?

Did you hear about the new diet and PT exercise program that requires you to not eat for 24 hrs and maintain an erection?

It’s a hard and fast rule.

Why did the woman murder her therapists and waited?

Because the therapist said, “Time heals all wounds, physically and mentally.”

A man enters a bar and orders a shot of vodka.

He complains to the bartender, “I’ve been so stressed lately. I recently began doing that Chinese thing with the needles.”

What did the PT say when they were interrupted?

“Psoas as I was saying!”

What kind of exercise did Jesus do?

Why shouldn’t you date someone who does PT exercises to relieve stress?

They’ll run when it gets hard.

A man visits the doctor because he has a history of migraine headaches.

When the doctor conducts his history and physical, he discovers that the poor man has tried nearly every therapy known to man with no improvement. “Listen, I have migraines, too,” the doctor says, “and the advice I’m going to give you isn’t really anything I learned in medical school, but it’s advice I’ve gotten from my own experience. When I have a migraine, I go home and soak in a nice hot bathtub for a while. Then I have my wife sponge me with the hottest water I can stand, concentrating on the area around my forehead. This is somewhat helpful. Then I get out of the tub, take her into the bedroom, and force myself to have sex with her even though my head is killing me. Almost always, the headache goes away right away. Now, give it a shot and come back in six weeks.”

Six weeks later, the patient returns, beaming. “Doc! I followed our advice, and it worked! It truly works! I’ve been suffering from migraines for 17 years, and this is the first time anyone has ever helped me!” “Well, I’m glad I could help,” says the doctor.

“By the way, doc,” the patient continues “You have a beautiful home.”

Why did the acupuncturist have so many assistants?

They needle the help they can get.

Because they can teach fine motor skills.

Did you hear about a patient who was passionate about exercise?

Husband to friend: The Physical therapist told my wife she should do some exercise.

Friend: And is she doing this?

Husband: Well, she is – if jumping to conclusions and running up bills can be called exercise.

Did you hear about the man whose chronic muscle pain is completely gone after getting acupuncture?

The pin really is mightier than the sore.

What was the therapist’s advice to Santa?

“Next time you lift someone’s spirits, lift with your legs, not your back.”

Why are physical therapists always so calm?

Because it’s their job to exercise patience.

Physical Therapist: How often do you exercise?

Physical Therapist: A week? A month?

Patient: I have given my answer.

What did the acupuncturist say when his patient didn’t show any improvement?

What did the therapist tell the patient who came in complaining about lower leg pain?

What exercise does the Physical Therapist recommend for the ghost?

A few weeks after his father’s hip replacement, a son was driving him to physical therapy.

“Uhhh no?” the son replied.

Father said,” Mine do, they’re prosthetics.”

What do you call a patient that handles their physical therapy like it’s a cake walk?

Are you a positive L3 myotome?

Cause you make my knees weak.

What two things did Terry study in college?

How do you raise your patient’s physical therapy expectations?

Keep them on their toes.

The Physical therapist is working with their new patient — a man in his 90’s who has recently started having some falls at home.

The PT resumes their questions about the patient’s social situation, and whether he has support at home. The patient begins to, very slowly, fall over the left side again. With the reaction time of an experienced professional, the PT once again reaches out and assists the patient back to upright. As the PT returns their eyes to the clipboard, they can hear the patient begin to softly sob.

The PT, trying to be empathic to the situation says “Mr Joseph, I see that you are upset. Will you tell me what’s wrong?”

What’s the difference between a PT and a terrorist?

You can negotiate with a terrorist.

What did the femur say to the patella?

A gingerbread man walks into the clinic and complains that his knee hurts. The physical therapist says, “Have you tried icing it?”

“Come on,” says the therapist, “I’m only ribbing you.”

Why did the professional baseball player come into the clinic with a limp?

He took too many walks.

What do you do if you hurt your foot while you’re driving?

What do you call a T-Rex working out all day?

On the examination table is a young woman.

The PT conducts a thorough examination. He turns to the woman after a long pause and says, “Looks like you’ve got a broken finger!”

What did the PT say to the bodybuilder with a herniated disc?

How do you know your PT is into you?

She said that I had acute tendinitis. 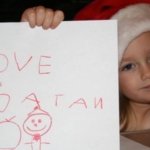 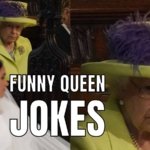